While retro shops selling nostalgic trinkets and snacks are a familiar sight in historic districts, the owner of one such store in Pingtung County has discovered an unexpected use for his collection — as a salve for dementia.

After retiring from a career at a foreign company, Liu Hsiao-tien (劉效典) returned to his native Chaojhou Township (潮州) to be with his elderly mother and open a store with his collection of more than 1,000 retro items.

As a child, Liu lived with his family in a Japanese-style house, where his father renovated old furniture and household items. 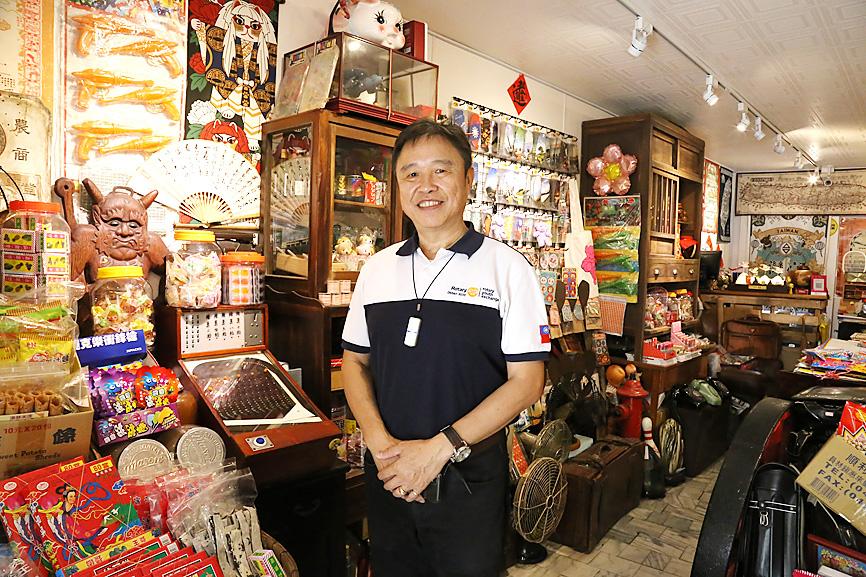 However, when the house was torn down, everything his father had collected went missing, including the toys he had saved from his school days.

Mourning the disappearance, Liu took it upon himself to remedy the loss.

For years, he used his free time to peruse flea markets for old snacks, toys, payphones, phonographs and whatever else he could find.

He even acquired a bicycle ridden by the owner of a popular ice dessert shop in Chaojhou, a piece of local history.

“I never thought my collection would become a remedy for my mother’s dementia,” Liu said.

His mother used to sell furniture at a shop on the central traffic circle in Chaojhou, but after she developed mild dementia, Liu returned to look after her.

Before long, he realized that she had particularly strong memories associated with childhood games, especially playing pachinko to win candy and “marble” soda drinks.

When in such an environment, Liu said that his mother felt especially at ease.

In his retirement, Liu is operating the antiques store from his mother’s old furniture shop and drawing upon his experience working abroad to help exchange students.

It was through conversations with students that he discovered the draw his collection has among foreigners, and he was even interviewed on a YouTube channel run by “Aiong,” an American who speaks Hoklo (commonly known as Taiwanese).

“Retro things not only arouse nostalgia among Taiwanese, but foreigners also like this kind of strong ‘Taiwanese flavor,’” Liu said, adding that through his collection, he hopes to share these recollections with even more people.

Comments will be moderated. Keep comments relevant to the article. Remarks containing abusive and obscene language, personal attacks of any kind or promotion will be removed and the user banned. Final decision will be at the discretion of the Taipei Times.