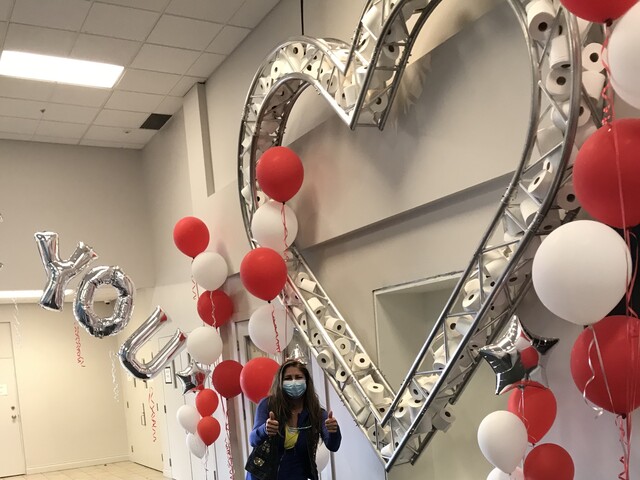 Despite Diana Bertucci’s experience in Kelowna last week, Interior Health says it is not their policy to vaccinate the caregivers of elderly people, outside of the age-based vaccination schedule.

As of Saturday, the province is booking vaccination appointments for those aged 79 and older.

The province announced last week that a number of “priority groups” of frontline workers will be offered the AstraZeneca vaccine over the next couple of months, outside of the age-based rollout, but those people will be contacted by public health.

Only those people who are of eligible age should be calling the vaccine appointment hotline, which is 1-877-740-7747 in the Interior.

A Kelowna woman is thanking her lucky stars after she says she got a big surprise when she brought her 86-year-old father for his vaccine at Trinity Church in Kelowna this week.

Diana Bertucci, 61, says she brought her father in for his vaccine on Thursday and says she was surprised and overjoyed when she offhandedly asked if she could get her vaccine while she was there taking care of her dad, and the answer was yes.

“Here’s what happened, they said if you’re a spouse or a caregiver of the person (who you brought to their appointment) you get the vaccine even if you don’t have an appointment,” Bertucci says.

“I am 61 so my vaccine date is not even on the radar yet. I am my Dad’s primary caregiver and I was thrilled to discover, when I was there that I could get my vaccine too! They told me that spouses, people that live full time, or are a primary caregiver to the person they bring in, they can get the vaccine right there. I have talked to a lot of people who are not aware of this marvelous opportunity.”

The fun didn’t stop there.

On the way out of the vaccine centre there is a massive steel heart stuffed full of toilet paper and surrounded by balloons.

“I was really shocked when I saw it, the toilet paper, how clever was that?”

Bertucci says the big heart prompted smiles all around even though she overheard one elderly couple remark that it must have been left over from Valentine’s Day, “I said no, no, no it’s a big heart stuffed with toilet paper.”

“We all need some light-heartedness and levity in these stressful times.”

Walk through the tulips for Alzheimer's care and research – KATU