Women, but not men, who regularly read a newspaper are 35 per cent less at risk of dementia than the rest of the population.

Men however, are 36 per cent less at risk of dementia if they regularly use a mobile phone. The same protection was not seen for women.

Analysis also revealed married people who participate in a pastime or hobby are 30 per cent less at risk of dementia.

Scroll down for video 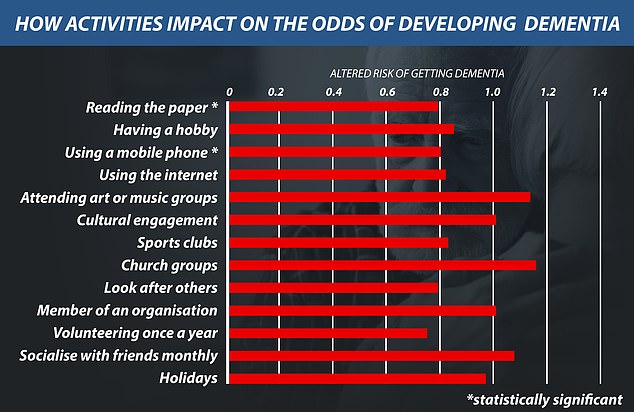 Researchers looked at 13 leisure activities and their influence on dementia risk — six were deemed to be ‘intellectual’ and seven were considered ‘social’. Mobile phone use and reading the paper were found to be statistically significant at reducing dementia risk 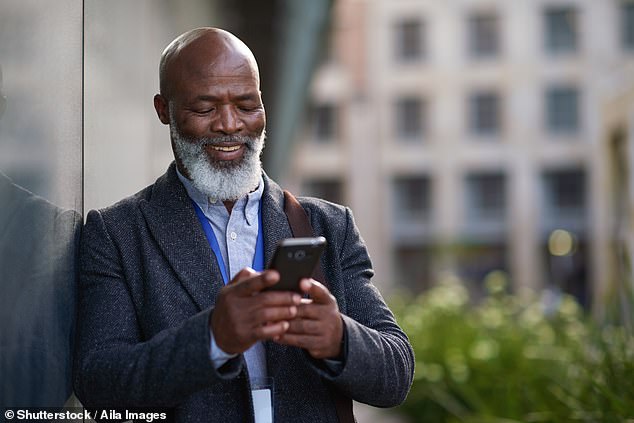 Men over 50 are 36 per cent less at risk of dementia if they regularly use a mobile phone. The same protection was not seen for women (stock)

First author of the study, Pamela Almeida-Meza, a PhD student at UCL, told MailOnline: ‘In the fight against dementia, it has been well established that certain modifiable risk factors such as cardiovascular health and depression management are essential for prevention.

‘However, our new findings contribute to the evidence showing that in addition to this, we can provide our brains with the ability to tolerate damage while retaining function by choosing to engage in enjoyable lifestyle.

‘Most importantly, our research was carried out in individuals aged 50 years and older, showing that it is never too late to finish that book, re-visit our hobbies, or even start practising a new skill.’

Researchers investigated the role a range of activities played on dementia risk by following more than 8,000 over-50s for up to 15 years.

They looked at 13 leisure activities and their influence — six were deemed to be ‘intellectual’ and included hobbies, reading the paper, using a mobile phone, and being online.

Seven were considered ‘social’ and included such things as being a member of a sports club, going on holiday, socialising with friends, and volunteering.

The majority of the participants (70 per cent) said they regularly do between two and four intellectual activities.

Just three per cent of the participants reported no engagement in any intellectual leisure activities and four per cent said they did all six activities.

Ms Almeida-Meza said that doing more activities increased a person’s protection. For each additional activity the risk of dementia dropped by nine per cent. 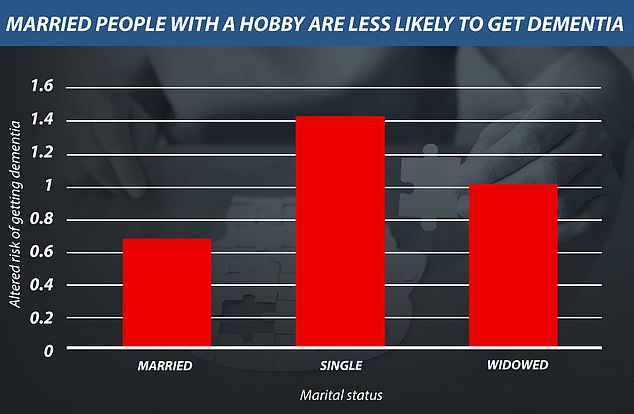 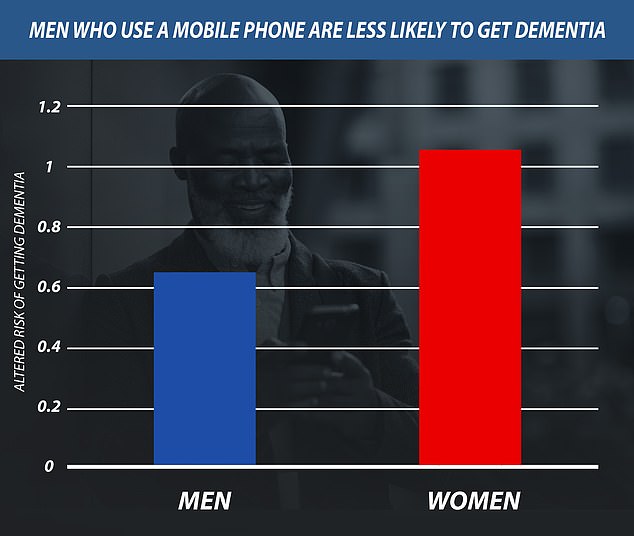 Men are 36% less likely to get dementia is they use a mobile phone regularly. Women however, get no protection 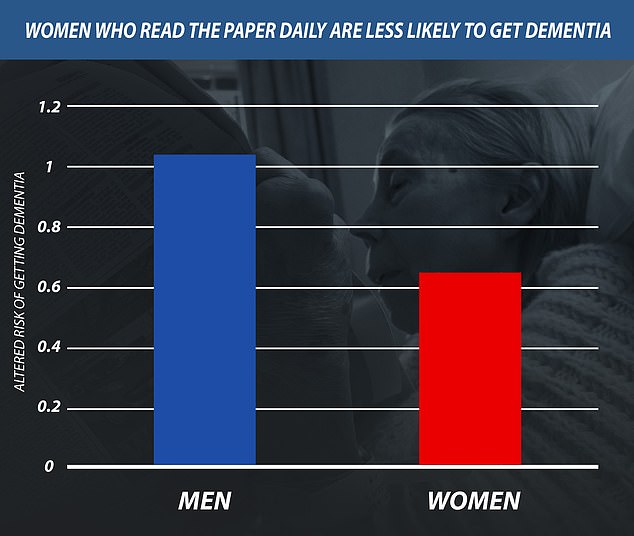 A genetic treatment has been developed that leads to fruit flies living as much as nine per cent longer.

Two therapies were created which each target a protein and they both were found to also stave off signs of Alzheimer’s.

Researchers from UCL altered the genetics of fruit flies — a common lab animal— with extra chunks of DNA inserted into their genome.

These alterations were specifically designed to promote expression of genes responsible for the production of two proteins.

In turn, these proteins, called forkhead (FKH) and forkhead-box-O (FOXO), act on neurons and glial cells in the brain, respectively.

Overexpression of FOXO leads to a ‘significantly increased healthy lifespan’ of 8.8 per cent.

For the neuron-targeting FKH, overexpression elongated healthy lifespan by 6.6 per cent.

None of the social activities were found to have a statistically significant protective effect against dementia when all confounding variables were taken into account.

However, reading the newspaper and using a mobile phone were found to reduce risk by 21 and 20 per cent, respectively.

Other activities were found to have a larger reduced risk, such as volunteering once a year, but the researchers found this not to be statistically significant and therefore more likely down to chance than indicating a link.

But when data for reading the newspaper and using a phone was stratified by biological sex, the researchers found a clear gender divide.

Men who read the paper get no protection from dementia, whereas women do. Yet men receive a similar level of protection from using a mobile phone, something that makes no difference to a woman’s risk of dementia.

The researchers broke all thirteen activities into four categories, with each model accounting for more variables.

The first merely smoothed out any gender differences and marital status, the second also included education and wealth, the third added any history of mental and physical health conditions and the fourth and final model was all of the above with the addition of lifestyle behaviours.

This breakdown allowed the researchers to discover that a married person who has a hobby gets protection from dementia if they take up a pastime.

This was not the case for single, divorced or widowed hobbyists.

The full findings are published in the Journal of Alzheimer’s Disease.