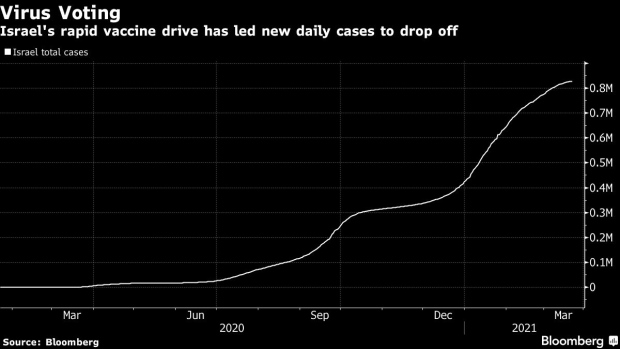 (Bloomberg) — Voting is going to have a different feel when Israelis head to the polls on Tuesday in an unprecedented second national election of the coronavirus era.

When Israelis last voted a year ago, the virus had only begun its rampage through the country of 9.3 million, with fewer than a dozen confirmed cases. Today, with that number approaching 830,000 and nearly 6,100 dead, the government is setting up hundreds of special remote complexes — including drive-through voting — to accommodate the ill and quarantined.

The number of voters per ballot station will be trimmed to prevent crowding, so about 1,100 additional locations have been set up. Some will be situated in retirement homes and assisted living facilities.

Voting centers will be provided disinfection and protection kits, and poll workers will be partitioned off from voters.

The virus add-ons have sent the cost of the election soaring by half, to over $200 million.

Walk your own way in support of people affected by dementia

Walk your own way in support of people affected by dementia

Getting to Yes: A Nursing Home’s Mission to Vaccinate Its Hesitant Staff