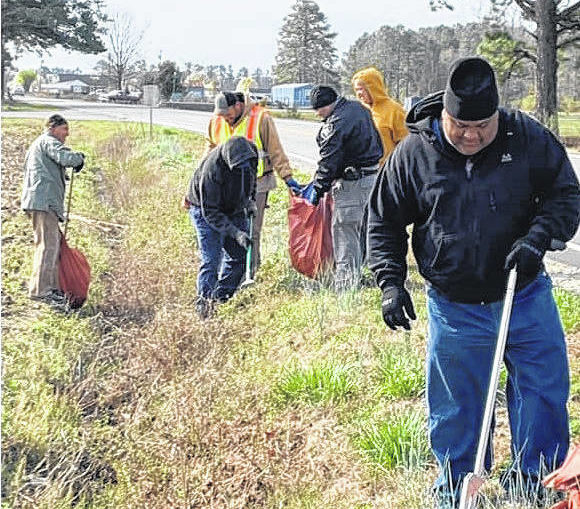 “A total of 1,545 large bags of trash was collected by just the groups participating in this event. Over 200 tires were picked up, several refrigerators and stoves and even a brand new 65” large screen TV still in the box was recovered on a roadside,” Robeson County Sheriff Burnis Wilkins wrote in a statement on Facebook over the weekend.

On a somber note, the remains of 10 dogs were found “wrapped in trash bags and thrown alongside a ditch bank” on an undisclosed road, the sheriff said. Most of the dogs were pit bulls, and the case remains under investigation.

The cleanup effort, which was the result of a collaboration between the Robeson County Sheriff’s Office, fire departments and other first responders, began about 8 a.m. at 29 fire stations across the county and ended about noon.

The sheriff spent his birthday helping clear roadsides of trash, and shared words of gratitude for everyone who helped.

“It was such a blessing to see so many people come together as one and clean up as much of the county as we could in a four-hour span. It was truly an unbelievable experience,” Wilkins said.

The Robeson County Solid Waste Department also placed extra trash compactors at some of its collection sites for the cleanup effort, he said.

“Operation Spring Cleaning was a huge success, with groups from all the over the county participating. This was the largest cleanup effort our county has had, and I am thrilled with the impact and results that can be seen across the county. Thanks to each and every person who took the time to keep our county clean and green!” she said in a statement.

“It went well. We picked up trash on West Fourth Street, Harry West Lane, Redmond Road and the canal beside Dollar General, which would be on Pembroke Pointe Lane,” Locklear said.

Seventy-five bags of trash were collected from those areas.

Some volunteers brought their children to the event, and Locklear hopes the trash pickup will discourage them from littering when they become drivers, he said.

The fire chief also said he is interested in participating in future cleanup opportunities.

Taylor said roadside trash is a deterrent for people wishing to move into the county or businesses considering locating in Robeson County. And the commissioner wishes fewer people would litter, but the cleanup effort proved to be a step in the right direction.

But, you can’t get every road, Taylor said.

“I think that the majority of citizens in this county care and are genuinely concerned about the issue (of littering),” she said.

Another litter-removal opportunity in Robeson County is the N.C. Department of Transportation’s Adopt-A-Highway Spring Litter Sweep, which is scheduled for April 10-24.

More efforts are needed to make and keep Robeson County clean, according to Locklear-Cummings.

And county Solid Waste will continue to do its part in encouraging community members to stop littering, she said. Its efforts also extend to the classroom, where school children are taught about the harmful effects of littering.

“No one person or organization can handle it alone,” Locklear-Cummings said. “It will take concerted efforts by everyone to make the sustained impact that we want to see.”