Author Sophie White says the death of her father, from early onset Alzheimer’s disease, meant she lost him twice.

Her new book, ‘Corpsing: My Body & Other Horror Shows’ has already become a bestseller and it has only just been released.

It is a collection of personal essays dealing with difficult issues such as grief, life as a young mother, addiction and mental illness.

The writer and podcaster told Lunchtime Live it took her time to go back and revisit her memories. 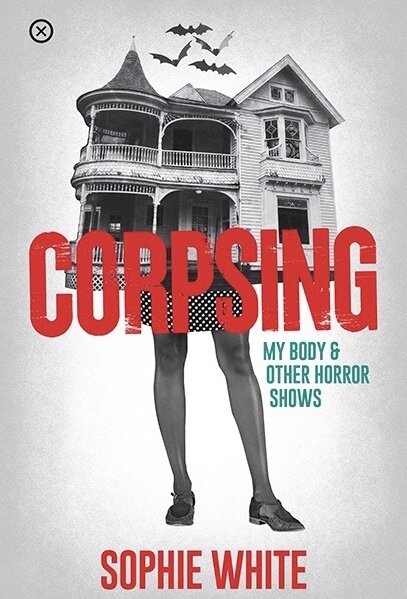 “The biggest things that I go into are grief: I lost my Dad to early onset Alzheimer’s – I suppose I kind of first lost him when I was 22, when he was diagnosed, and then I kind of lost him again three years ago when he died.

“It’s a very difficult kind of death, as I was witnessing it, it’s my inclination to write about what I’m experiencing.

“I just started writing it without any intention of ever publishing it or showing it to anyone, really.

“And then as the essays just kept coming, the book kept evolving, I kind of thought about putting it out there”.

‘Illnesses obscure our loved ones’

On her father’s death, she said: “You think that you’ve come to terms with it while the person is still there, still living.

“My Dad didn’t know me, my Dad didn’t speak or acknowledge myself or my mother for the last few years of his life.

“I thought ‘Oh I’ve grieved him already’ and then I suppose the biggest shock to me was that when he did actually die, I was just really devastated – obviously – and I struggled so much.

“I thought ‘What is this grief thing, how do you live it?’ – there is no shortcut.

“You expect grief to be sad, and I felt like I barely experienced sadness: I experienced anger, guilt – enormous guilt that I hadn’t really been a good enough daughter to him, I hadn’t loved him enough in his illness.

“There’s no blueprint for grief, but I definitely wanted to write about the experience of grief and how unexpected it was.

“And also what a process it is.”

And she said this process has helped her to remember her father.

“That illness, so many illnesses, they just eventually obscure our loved ones – we can’t see them sometimes anymore when you’ve been watching illness for so long.

“I suppose it’s just that you spend so long tapping out the hours at a sickbed, and everything about the person has become logistics maybe.

“It just changed your relationship with them so dramatically.

“So I eventually, through the years, putting of time between myself and that deathbed, I was able to remember him again – it didn’t hurt me anymore to think about him and I could spend time with those memories”.

Sophia developed a drinking problem after her father got ill, and also writes about her personal struggles.

“It deals a lot with my alcoholism, and I suppose when I first got sober – also three years ago – I felt like I was scrambling to find anything that really touched what I was experiencing as a young woman.

“Coming out to myself, as much as to everyone else, as an alcoholic.

“One of the interesting things is that I began the book when I was still drinking – still in my active addiction – to differentiate from the, I guess, dormant, never extinct addiction”.

But Sophia said she was determined to be honest with her audience.

“It sounds like a sort of pit of misery, but I’m told people find it funny – which is always my aim.

“I guess I don’t know any other way to be – I hear a lot from people kind of going ‘You’re so honest’.

“I don’t know why you’d bother to put a filter over any of this stuff – I just think a lot of the book deals with in shame.