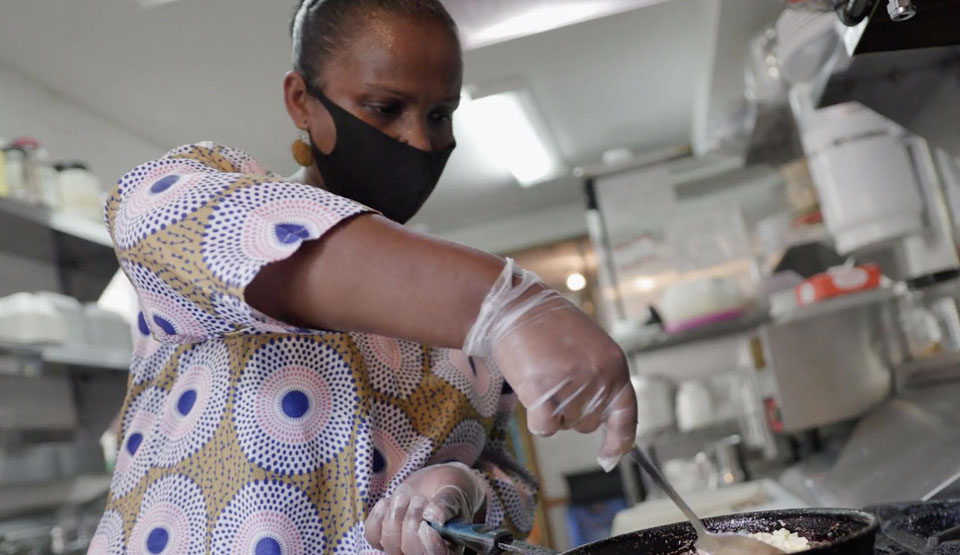 Women who held low wage jobs, including working in food service, were hardest hit by coronavirus layoffs and it will take special measures to get them back to work. | video snapshot

WASHINGTON—Big changes, in financing, social programs and male-centered attitudes towards work and its worth, are needed to bring the millions of working women whom coronavirus-caused closures kicked out of their jobs back into the labor force.

Three panelists drew that conclusion at a March 31 seminar hosted by the National Press Foundation, a D.C.-based think tank to help the nation’s journalists improve the depth and quality of their coverage of key issues.

One of those is the fate of working women, especially low-wage working women of color, millions of whom lost their jobs when restaurants closed, retailers shut and child and elder care opportunities disappeared due to anti-virus lockdowns.

National Women’s Law Center Vice President Melissa Boteach labeled the resulting recession—really a depression—a “shecession.” That’s because 2.3 million more working women than working men left or were kicked out of the labor force after the country had to shutter half of its businesses a year ago to try to fight superspread of the virus.

So many women lost jobs that now 57% of women are either working or seeking work, down from 59.2% just before the virus hit. The drop may not seem like much, but while a two-income house-hold is a virtual necessity for most families, it’s the lowest share of women in the labor force since 1988.

The female workers who lost jobs were already low-wage workers, since the 40 lowest-paid occupations in the U.S., notably child care and in restaurants, are female-dominated, panelist Catarina Saraiva said. Those female workers are also disproportionately workers of color, Boteach noted: 564,000 Blacks and 317,000 Latinas.

“Their unemployment rate is twice as high as it was—3.1%–before the pandemic hit,” she said of the working Latinas. “And 41% have been out of jobs six months or longer,” she said. Studies show the longer a worker is jobless, the tougher it is for her to find new work.

Some of the jobs started coming back as the economy slowly recovered, the panelists said. But then another crash hit working women in September, when schools reopened with learning by zoom, not in the classroom, due to the pandemic. Women who had just come back to work had to quit again, to take care of their kids.

That threw child care workers back out of their jobs. “There were 300,000 child care jobs that were lost. That’s one in every six, and half of them have not returned,” said Boteach.

There’s another problem, panelists Boteach, Saraiva of Bloomberg News and Camille Bosette of the Brookings  Institution noted: The long-running denigration of housework and child and elder care. Despite rising numbers of counterexamples, it’s still predominantly women’s work, studies show. As a result, child care is one of the lowest-paying U.S. occupations. So is paid elder care, they said.

The silver lining, one of the three said, is the rest of society now realizes it’s built on a foundation of depending on child care—a point unions, notably the Service Employees, have made for years. SEIU has intensively organized child care workers.

Congress’s Democratic majority recognized that, the panelists said. It provided $39 billion to re-open shuttered child care centers and other incentives to return women to those jobs, notably better pay and benefits than before, such as paid family and medical leave.

But what’s really needed, Bosette said, is a total rethinking of the value of child care jobs in particular, raising them in both society’s estimation, and in pay.

That dawning may occur in some CEO suites, one panelist said, as distance learning combined with jobs shows bosses their female employees, via zoom, juggling work while trying to manage and help educate their kids, too—who are running around the living room.

“We want to get to the point where low-wage women will not only make up the ground they lost, but also transcend where they were before,” said Bosette. That means paying those workers a living wage. That’s not what they earn now.

“It also means investing in retraining,” and not just for men in factories who lost their jobs due to subsidized foreign imports. “And it means investing in child care and adult care infrastructure,” such as new buildings for care centers, Bosette said. Saraiva, previewing Biden’s infrastructure bill, forecast he would propose those investments in it. She was right.

That still leaves one big problem: The entrenched attitudes towards women’s work. It’s those attitudes, the session moderator said, that led Republican President Richard Nixon to first propose—and then reverse himself and oppose—federal subsidies for child caregivers.

Bosette wondered how congressional Republicans would react. They already oppose Biden’s infrastructure plan because he would raise taxes on corporations and the rich to pay for it. In Nixon’s time, the GOP wrapped itself in the 1950s “traditional” family, a stereotype which dominated white suburbia. Denunciations of “socialism” and “government interference” in the family forced Nixon to reverse course, in 1970.

“It’ll be important to reorient ourselves away from the culture wars to ask ‘What do families need?’” Bosette added. “I fear we’ll develop a narrative similar to that of the ‘welfare mom.’”